This year, the Harwich Community Center is celebrating its 20th Anniversary at their current 100 Oak Street location. So on February 28th, they threw a 20th Birthday Bash Dance celebrating the occasion. Members of the Sound Dunes Swing Ensemble (SDSE) were thrilled to provide the musical entertainment for this joyous event with a slate of mostly new songs that have been recently added to our repertoire.

One of the new songs recently added is L-O-V-E (1964), originally performed by Nat King Cole and later by his daughter Natalie. It has more recently been recorded by Joss Stone and by Michael Buble’ in 2007. SDSE performed the song at this event as a vocal duet by vocalists Tom Jahnke and Linda Delorey. Harwich Channel 18, the local government access station, was at the event and recorded this portion of our performance….their recording is attached here for your listening pleasure. (Click on the following link for video)…..

L-O-V-E by The Sound Dunes

As happy an occasion the Birthday Bash was, SDSE members were somewhat saddened by the fact that this would be the last regular performance of vocalist Linda Delorey with the band.  Linda will be moving back to her hometown in western New York State and we wish her all the best and send her our love as she looks forward to having more quality time to spend with her family and loved ones.  She may be returning to the Cape during the summers and we will look forward to her hopefully having some time during her returns to perform with us again.

As with a number of SDSE’s recent performances at the Harwich Community Center, this event had a “full house” in attendance and the crowd seemed to enjoy dancing to almost every number that the band played.  One of the highlights of the evening was trombonist Dan Feheley recreating the Tommy Dorsey solo from I’m Getting Sentimental Over You (1932).  No, unfortunately we don’t have a video of his performance, so you will just need to be satisfied with the attached photo from his performance!  (Photos courtesy of Marge Frith)

SDSE has another concert coming up at the Harwich Community Center on April 24 as the HCoA presents its “Swing into Spring Dance”.  Like most of their events, this will likely be another FREE Public event.  Once again, it is likely that reservations will be required due to venue capacity limitations. We would encourage those who wish to attend the next SDSE FREE Public event not to hesitate to make their reservations as soon as possible as April approaches, before the demand for reservations reaches the “cut off” level as it has during several past SDSE events. 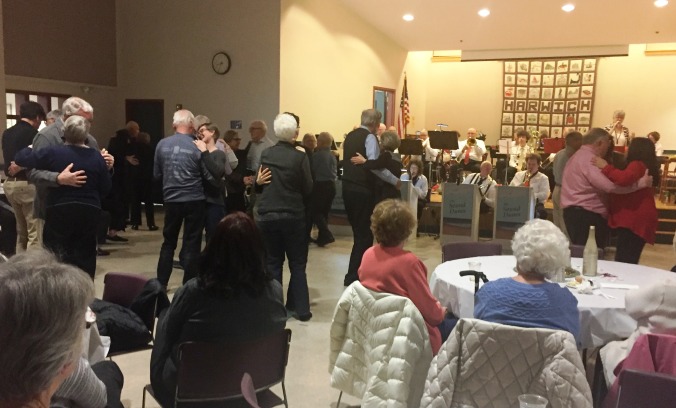